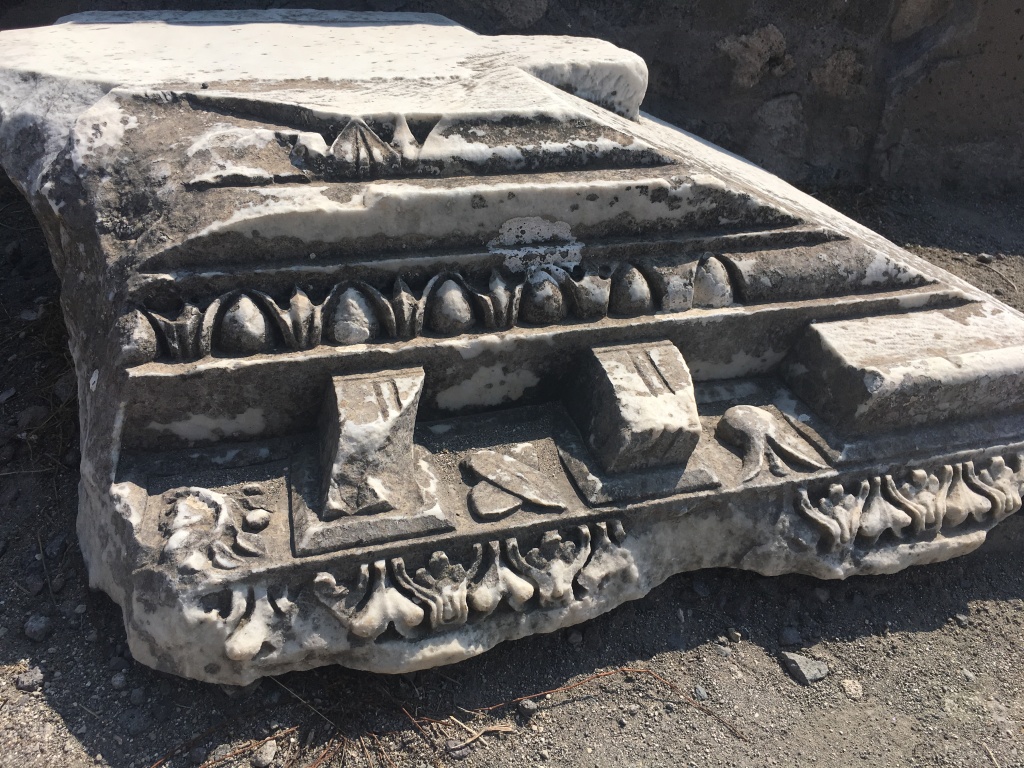 Italy is absolutely beautiful.. but it’s beauty runs deeper than its beautiful coast lines and amazing food – it also has a rich history that makes it even more magnificent.

On our recent Italian adventure we had the opportunity to take a tour of Pompeii – one of the most memorable and identifiable cities in Italy. And one of the countries most popular tourist destinations (thank you, Wikipedia).

I’m not going to give you a history lesson here, first of all because I knew very little about Pompeii till our trip and secondly because its tragedy is one that I respect to much butcher.

Cliff Notes: Pompeii was an ancient Roman city near Naples that was buried in volcanic ash and pumice when Mount Vesuvius erupted in AD 79 (thank you – again, Wikipedia).

But I did want to share part of my experience with you all because it really is a MUST if you ever get the chance.

Disclaimer: Thousands of people died when this city was engulfed with ash and I’m not naive to that – so please don’t think I’m being insincere by smiling in the pictures below. I was genuinely excited to be there and to learn about the city and its past, beyond the its tragic end. 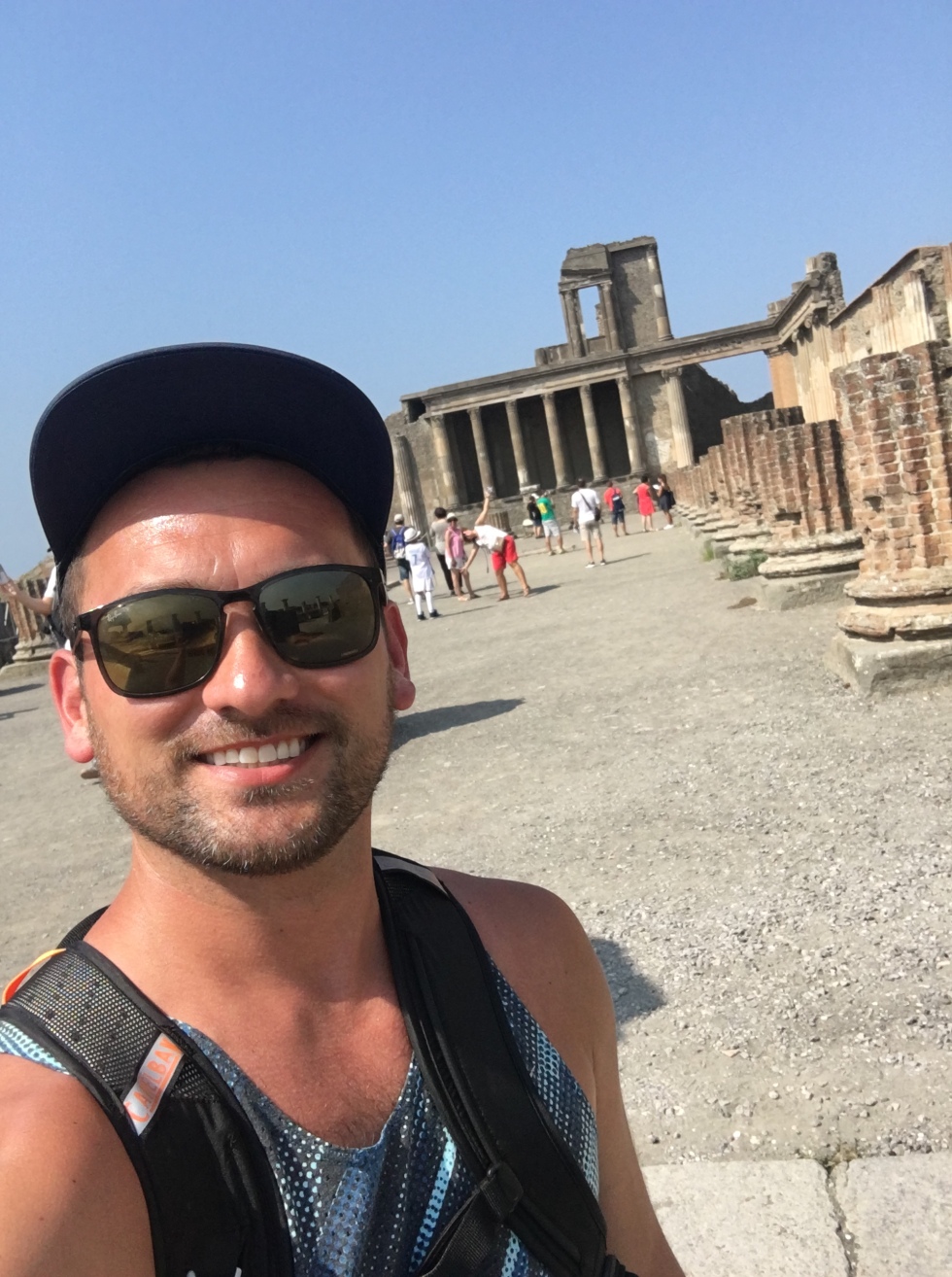 If you’re wondering why there is a mix of modern bricks blended in with the older structures its because the teams of archeologists and historians tried to maintain and restore the original structures where they could and often used modern material to fill in the blanks.

And if you are in amazement of these statues – calm it down… These statues are totally fake which popped my bubble too. They were placed here to give visitors an idea and feel for what Pomeii would have looked like. And even though they are fake – I still liked them and they did the trick to create an atmosphere. 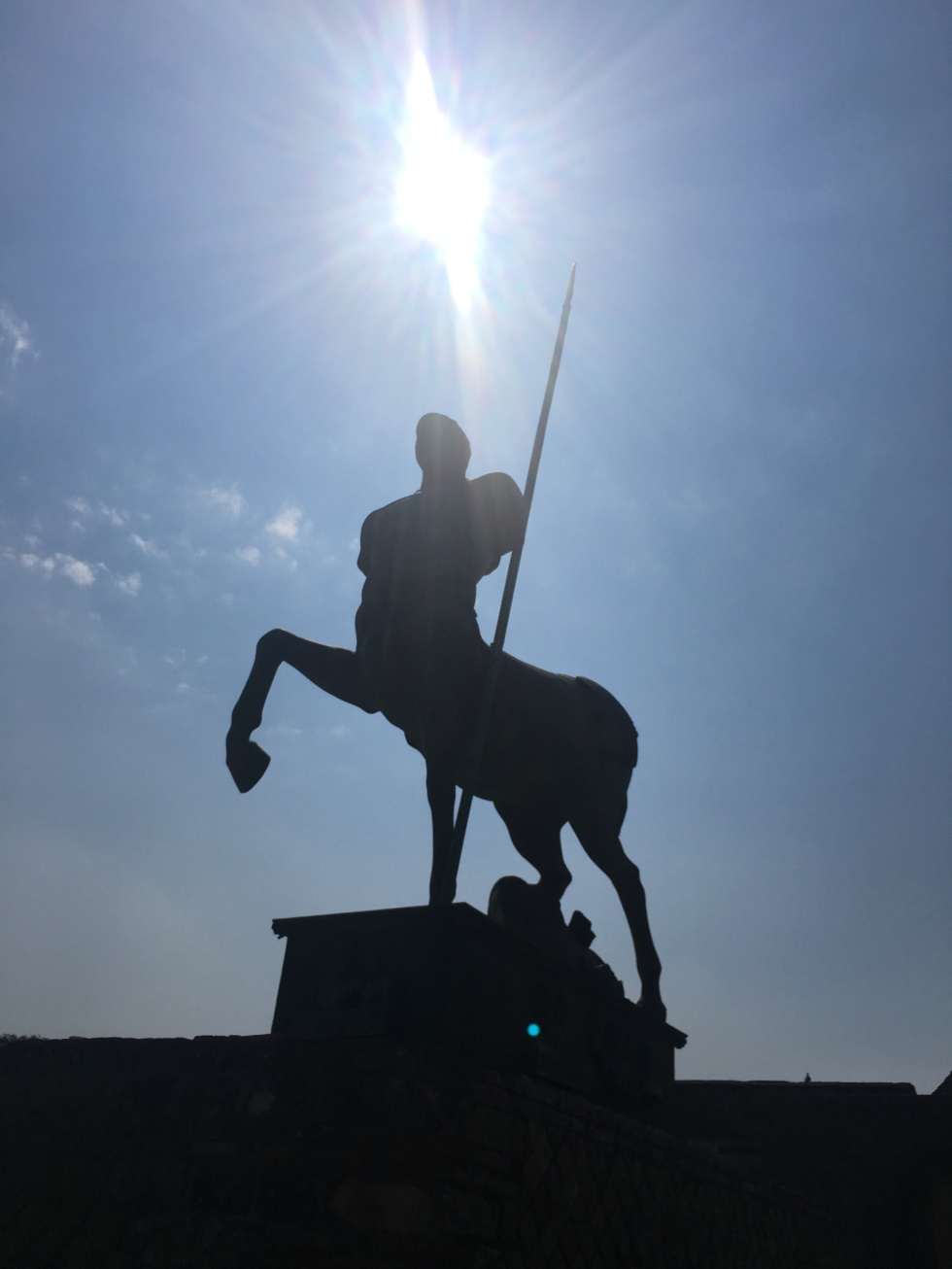 In the distance (in the image below) you can see Mount Vesuvius – the volcano whose ash made it all the way to where I was standing in the 1200’s. 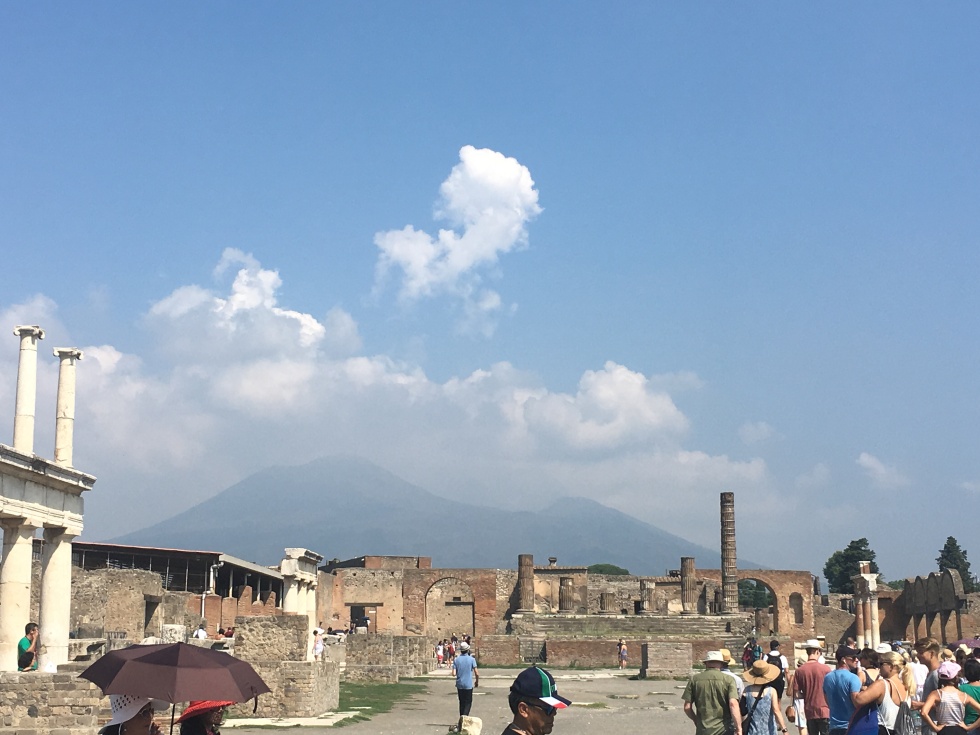 There were few original pieces of marble left in Pomeii after the city was excavated, it has been pillaged and torn through by people trying to rebuild or salvage what they could. 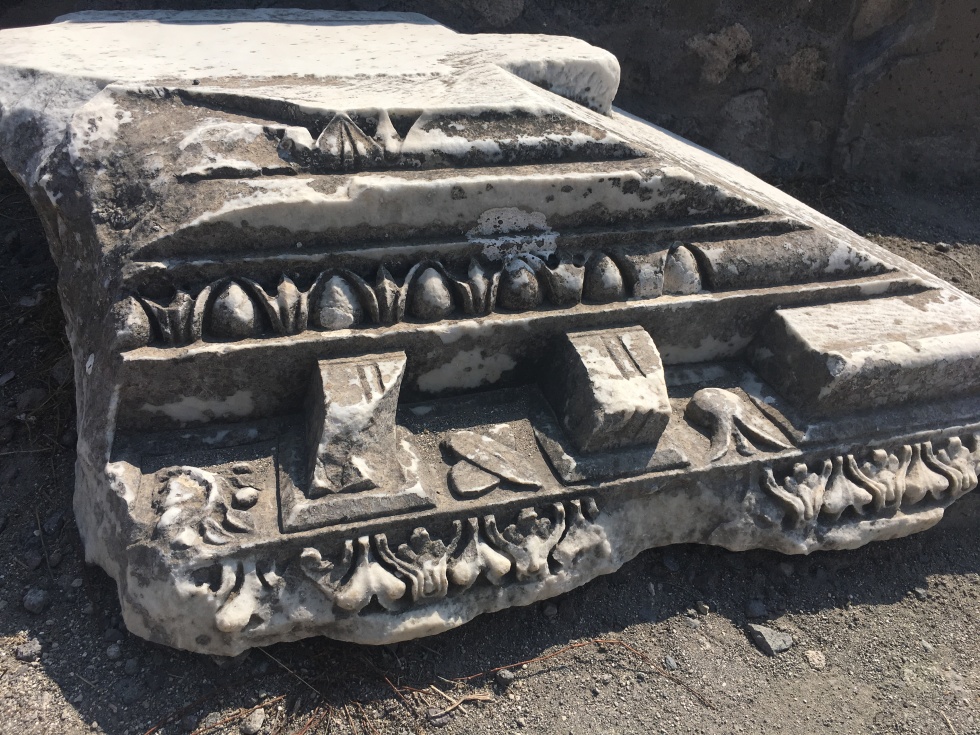 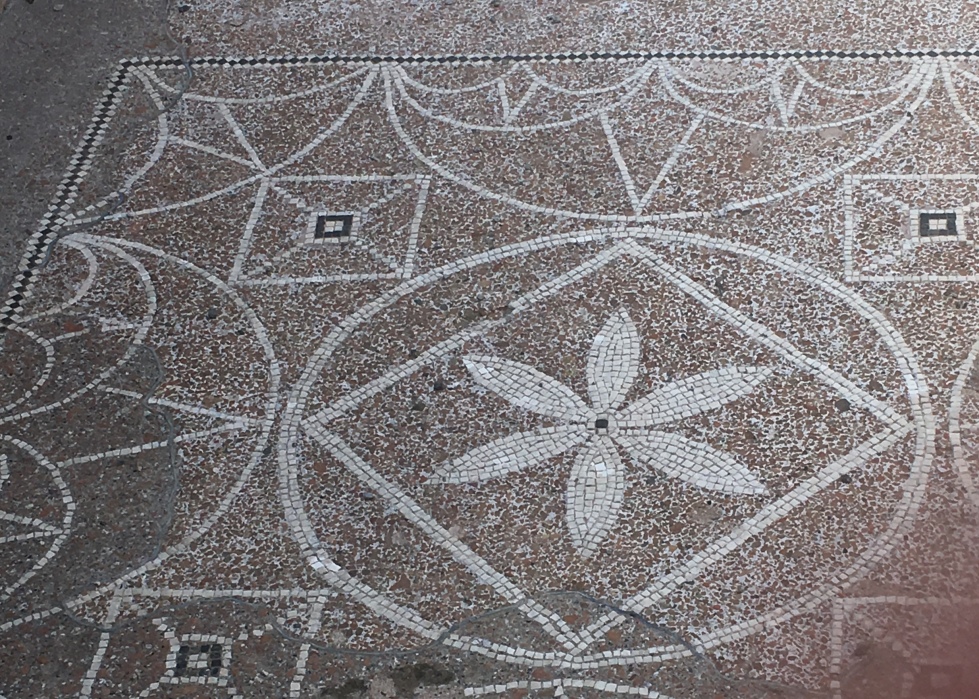 Walking around there were some original floors still in tact from the entry ways or grand atriums. The roman architecture is pretty amazing… As we walked through each of (what was left of the) homes I tried imagining how the structures use to stand, how they were decorated and what the views would over look. What now was the entrance to the city use to be a clear view into the ocean. What was a pile of deteriorated columns use to stand majestic columns welcoming you into the grand entrance of someones home.

And while most of the structure around me and above me had come down – some of the structures under me where still as they were hundreds of years ago. The beautifully designed and meticulously placed tiles which use to be status symbols and reflections of ones wealth still managed to take visitors breath away (like mine). 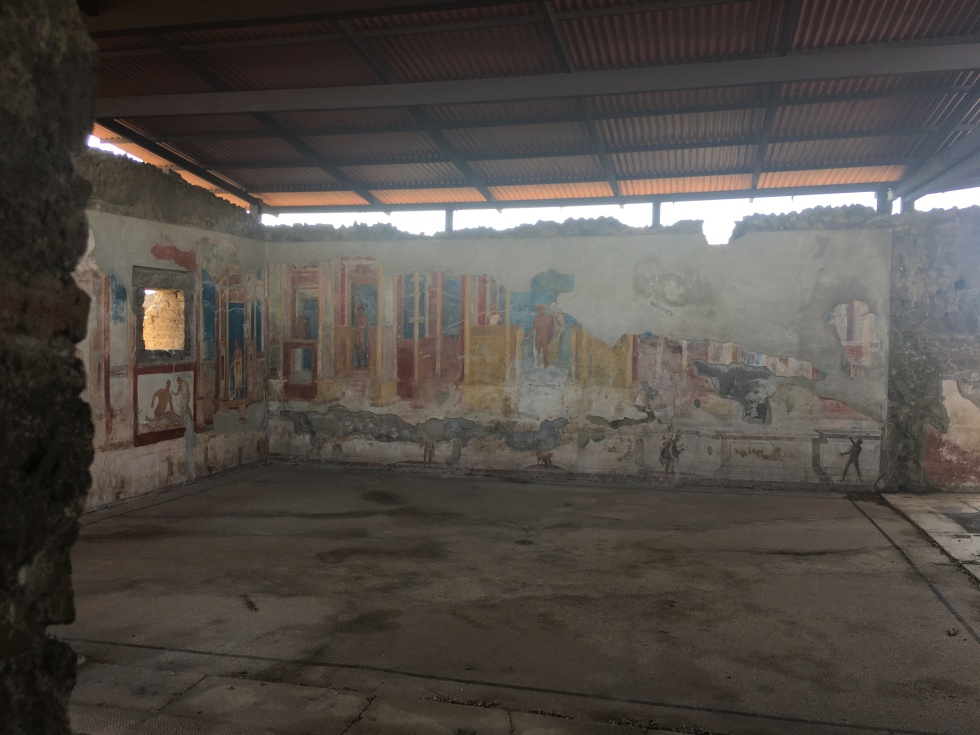 As we ventured deeper into Pompeii we got to see more and more of what life was could have looked like for its inhabitants. While some used their money to decorate their walkways with gorgeous tile designs – like the ones pictured above. Others used the money they had to paint their walls up with the material items and views they wish they had. Funny that almost a thousand years later society still has the same social dynamics.

I’m not sure what use to sit on display here, but if I had this in my home I’d stack my Starbucks Cup collections here – case in point to why I can’t have nice things.. 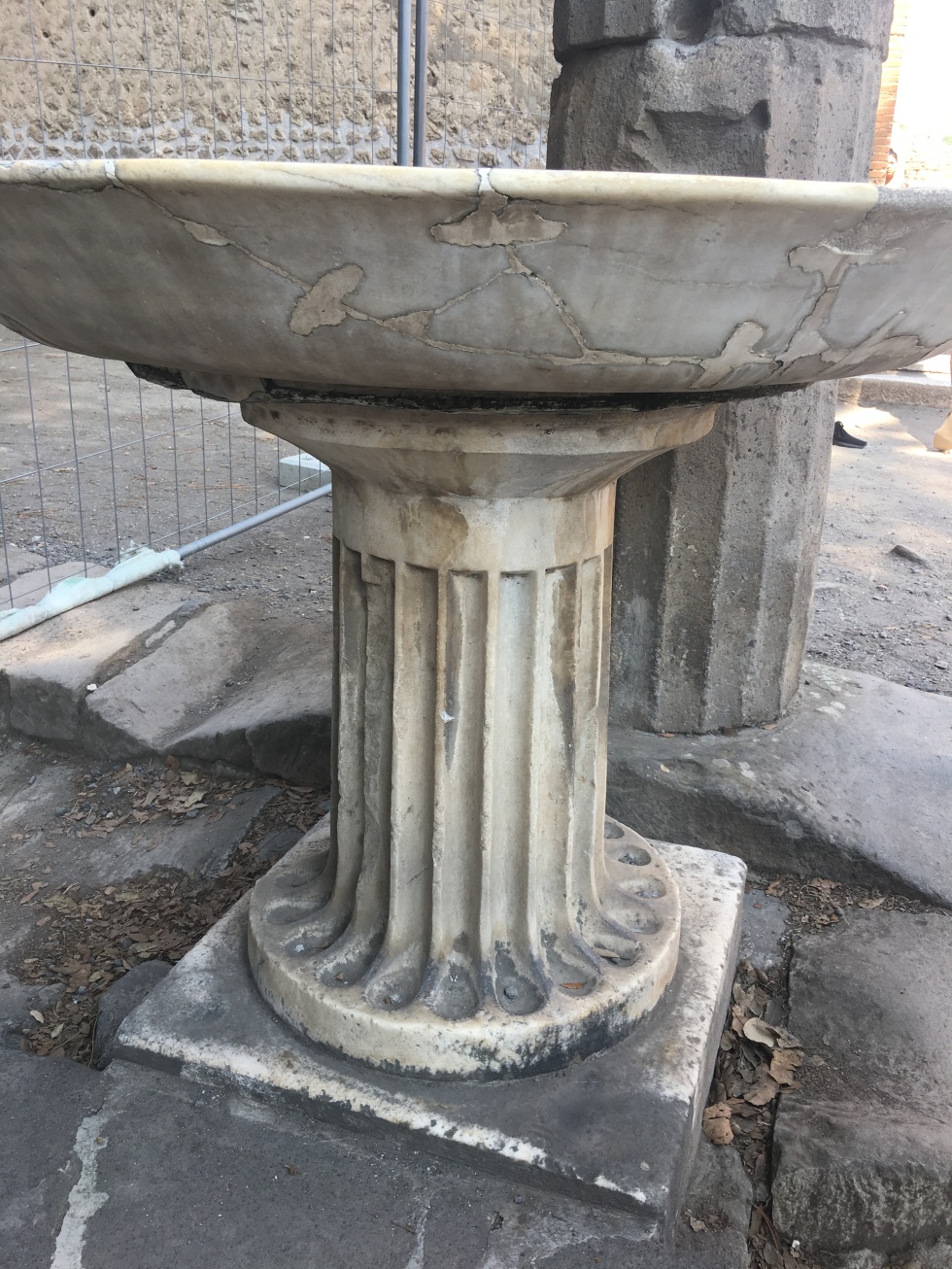 Occasionally we would see items like this fountain… Sadly, not from Pompeii. Just another relic to piece together what Pompeii would have looked like. 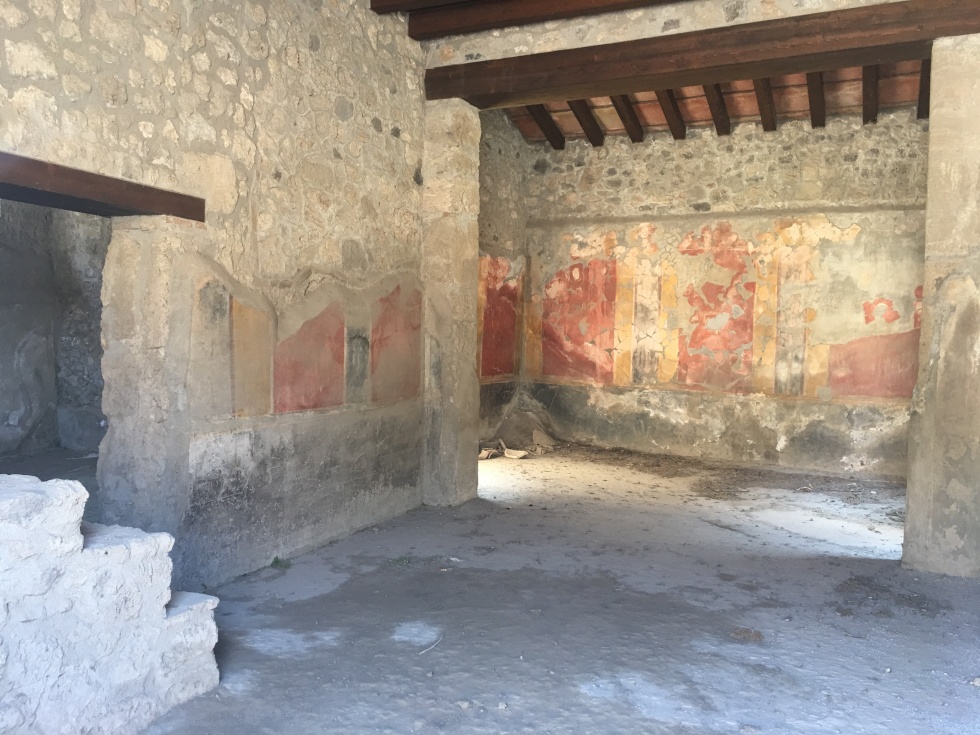 I loved taking in the different art that still presented itself as we passed through carved out streets and closely packed ruins.

Now, I’m not totally sure what this story is saying – but if it weren’t so discolored and faded it might have bumped my blog up to a Rated R rating…

The pictures of animals really got my attention on this tour. While so much has changed from the lives these people lived to how we live now – the importance and significance of animals for food, companionship and entertainment is still alive and well. 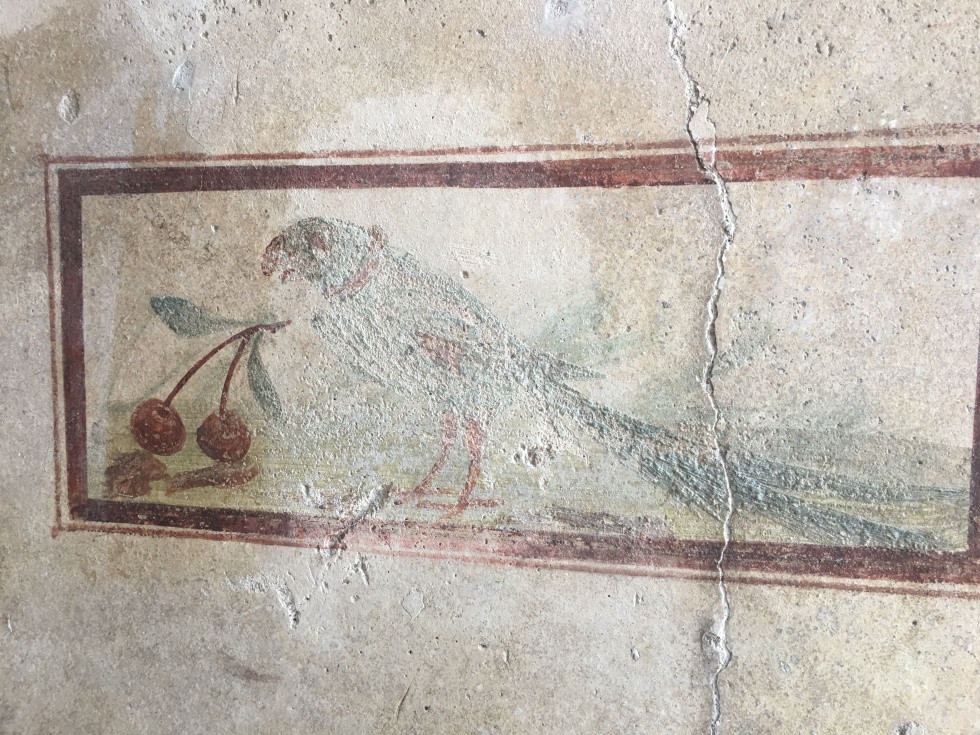 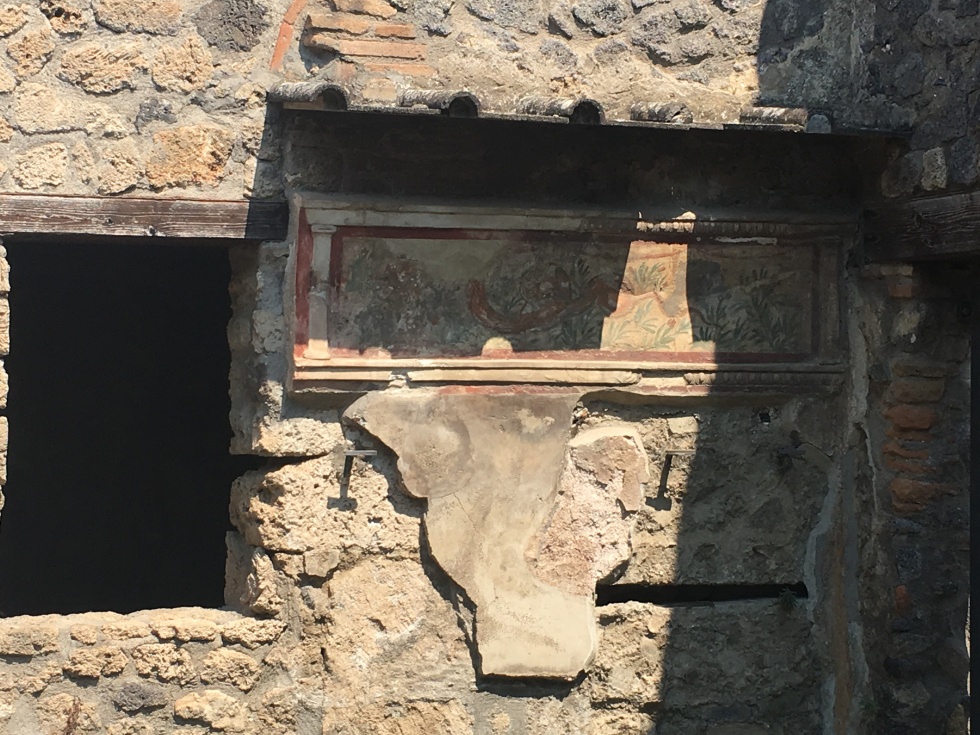 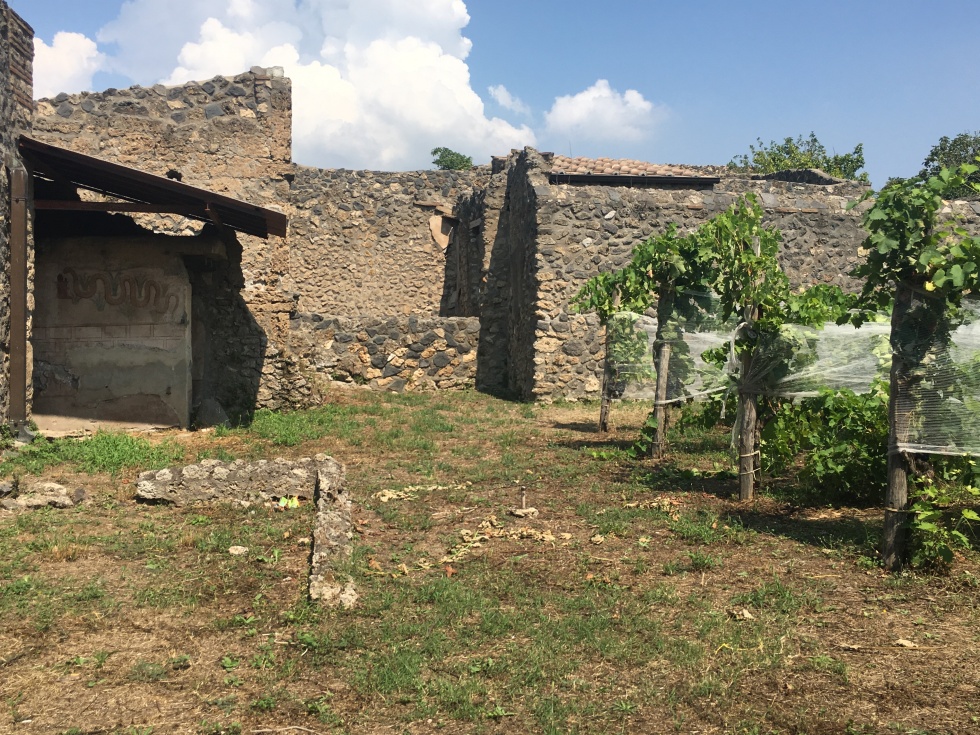 Now the next image (below) is pretty sad… No sugar coating here. The village was buried in hot ash and not everyone made it out alive. I cannot begin to image the tragedy families faced if they didn’t get out soon enough.

On a much lighter note… this next image is a carving that was very popular and used in a lot of the architecture in and around Pompeii. It symbolized “wealth and confidence.” 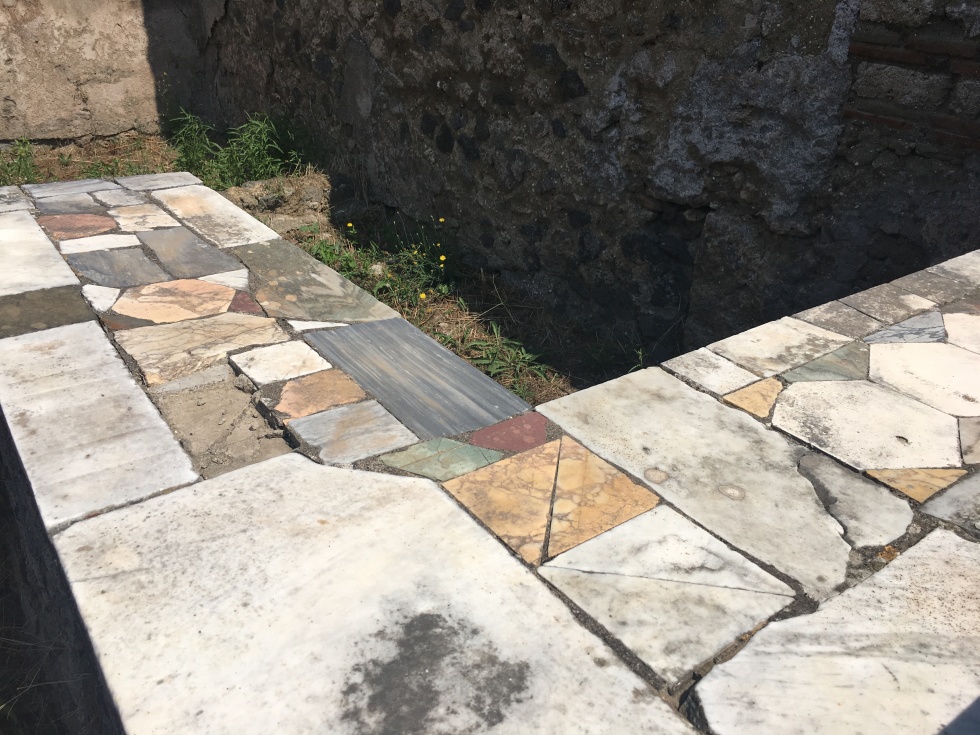 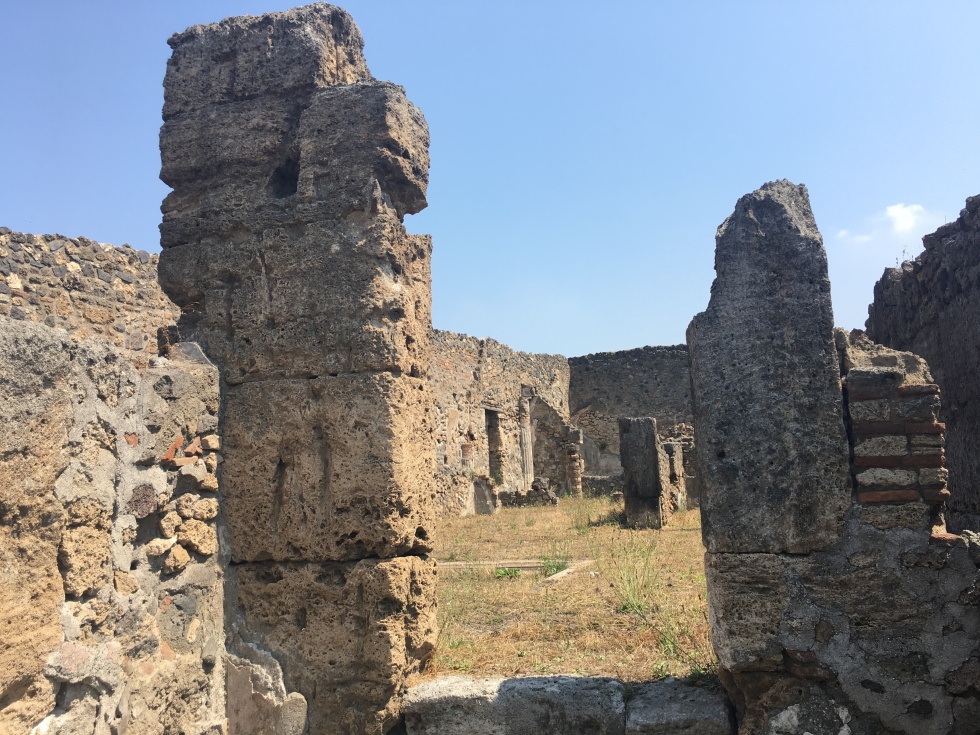 I really wish we had more time to explore every inch of Pomeii but we only had a few hours and Pomeii. We made the best of our experience but left knowing there was still so much to see and learn about this magnificent city of the past.

The picture below is of just one of the walkways that rolled through Pompeii. I found these to be fascinating because you could see where carts and horses have worn down the stone – literally carving paths where they walked and moved through every day. And those big ass steps were used as stepping stones to cross the streets when those streets flooded – and still served to make crossing the streets easier for us on our tour. 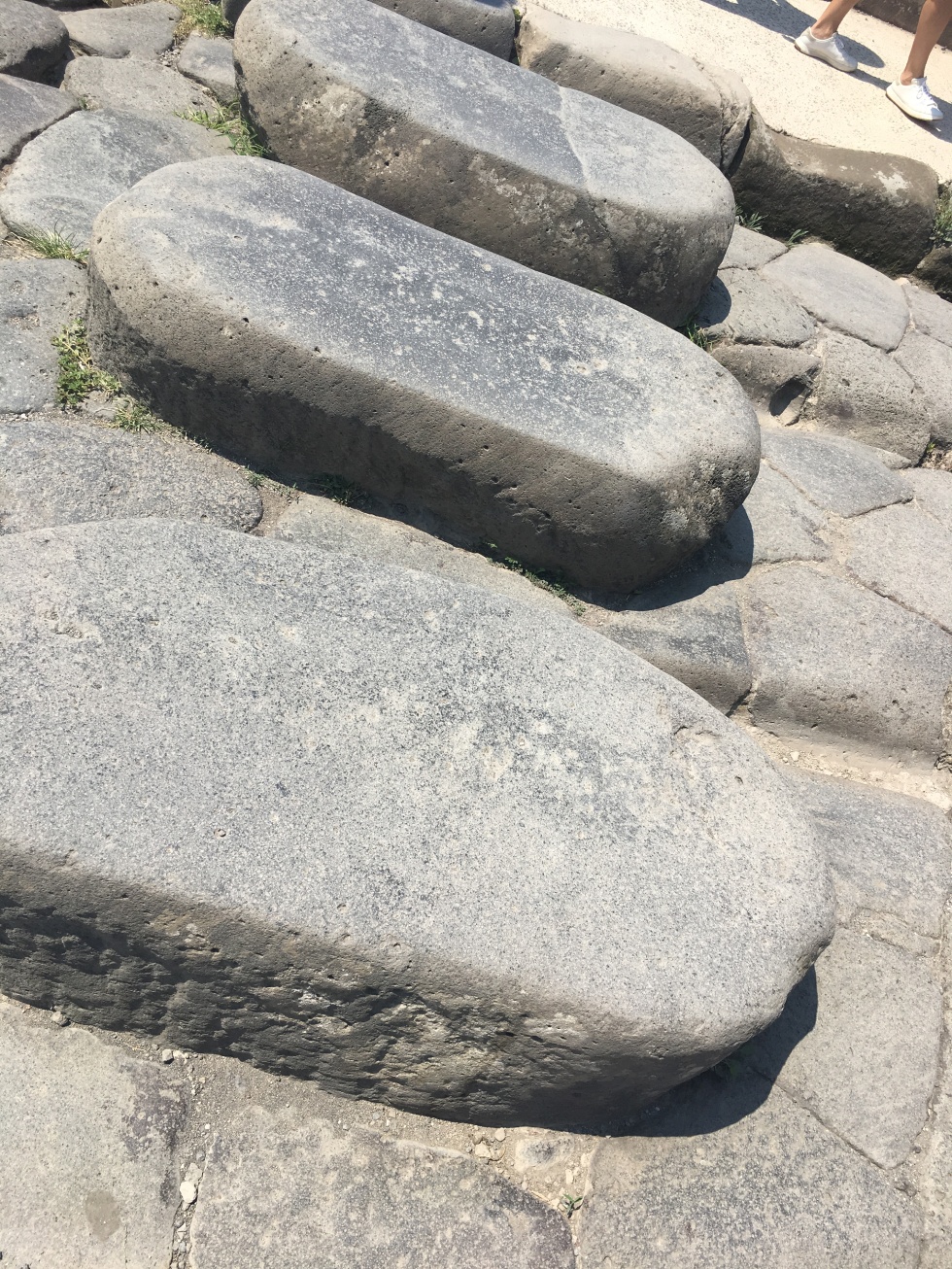 My pictures give you a little tour of what we saw, but if you’re still reading this you need to watch my video of our tour. There was so much to see and I think I was able to capture more videos then photos on our walking tour. 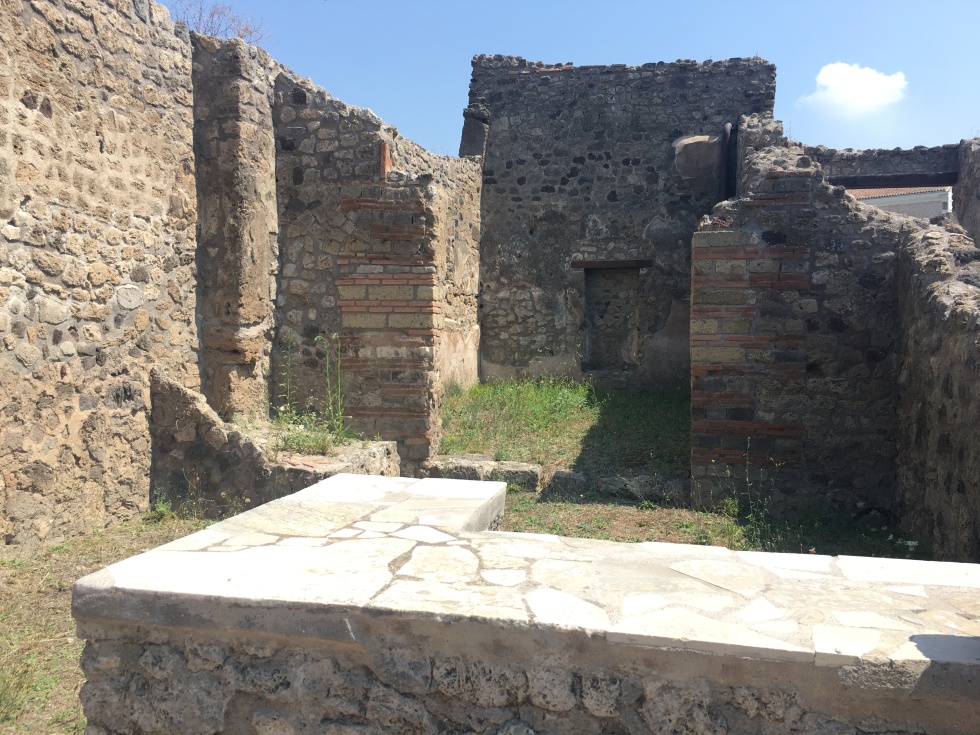 Thank you for coming along with me once again and please let me know your experiences if you’ve been to Pompeii!

I love traveling, seeing new things and taking in new experiences – and this is just one way that allows me to remember the details in the fabric of these adventures!

Stay tuned for more to come from Capri, Zurich and Luzern!

The City of Pompeii, Italy from Matthew Goto on Vimeo.

iThere are no comments

Begin typing your search above and press return to search. Press Esc to cancel.